Home » What If Your Antagonist Isn’t Human – What’s The Secret Sauce Then? 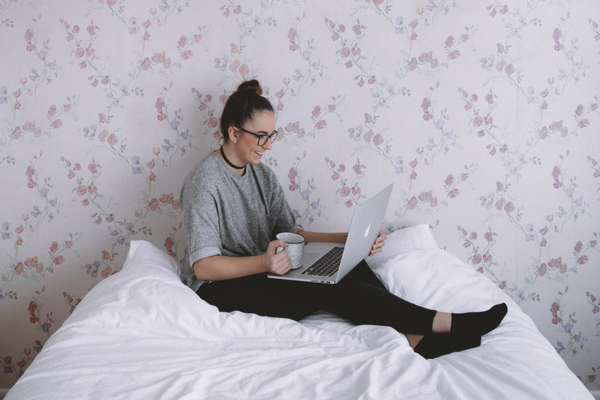 In my last post, I looked at the secret sauce you need to make antagonists menacing. Today I want to go beyond basics with non-human antagonists. In school, we all likely learned the different types of conflict in literature:

human vs human (very common, no examples needed)
human vs himself (Hamlet, The Tell-Tale Heart, A Walk To Remember)
human vs nature (Lost in the Barrens, The Perfect Storm)
human vs supernatural (anything with vampires, werewolves, witches, demons, zombies, etc.)
human vs animal (King Kong, Godzilla, Ghost and the Darkness)
human vs society (Hunger Games, Handmaid’s Tale)

Not everyone likes to be put in a box, so there are other types of antagonists who don’t fit in these categories like time (sometimes it’s a plot device, sometimes it’s an antagonist), memory (faulty, spotty, unreliable), phobias or anxieties (preventing a character from reaching his goal), situations (they only have 12 amps to bring Apollo 13 back to earth)–you get the idea. 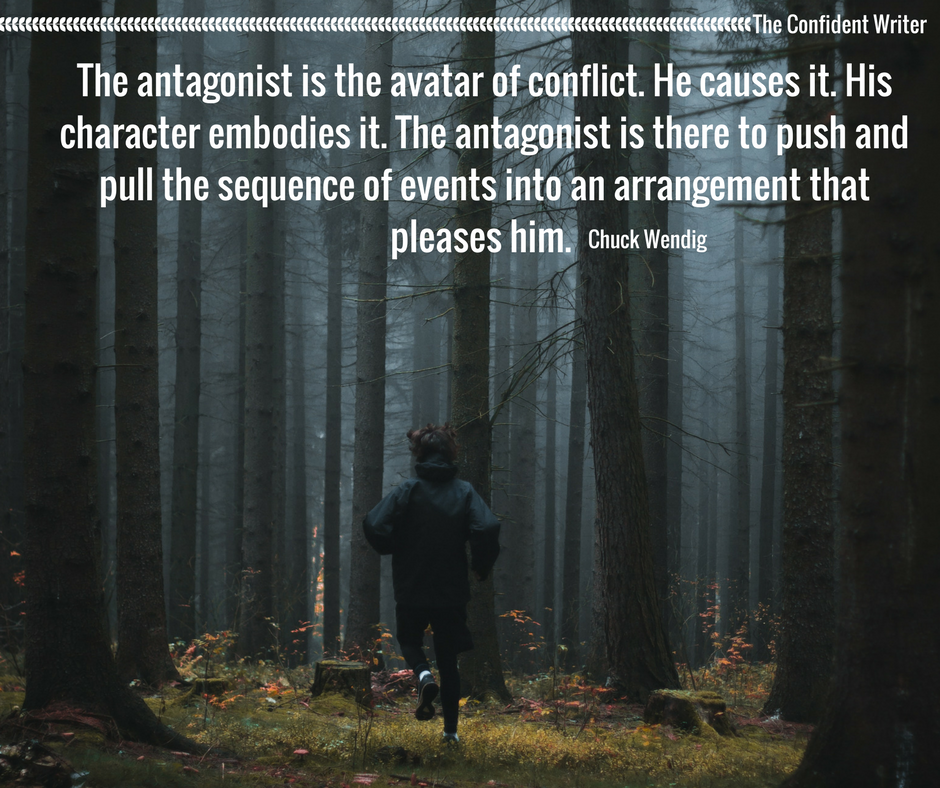 How To Recognize An Antagonist

Sometimes things can get really muddled in story land and it’s hard to know exactly who or what is the main antagonist. Some stories include villains, themes, and obstacles that can look like an antagonist. Flip to the beginning of the story. What’s the inciting incident? Whatever problem is caused by the inciting incident is the main story problem and whatever is causing or in opposition to the main story problem is the antagonist – generally.

Many of the types of conflict above can also be just an obstacle. A man who is marooned on a mountain in a snow storm is in conflict with nature and if his goal is survival, then that’s a valid man vs nature conflict. However, if the man’s goal is make it off the mountain to kill the person who put him there, then the mountain (nature) is simply an obstacle. Do you see the difference?

An antagonist actively works to prevent the protagonist from reaching their goal. Even in man vs nature stories, where the weather or environment is indifferent, it can take on its own personality and seem vindictive or angry and throw its worst at the protagonist so they can’t succeed. There’s no story if the man stranded on the mountain happens to land there when a chinook wind passes through, melts all the snow, and he just walks back to civilization. Instead, the mountain will throw an Alberta Clipper at the man and bury him chest-deep in snow for a week, have rotten ice give way and toss him down an embankment so he breaks an ankle, and and and – as though the mountain is actively preventing the man from leaving, sees him as an intruder.

The key point is what’s your protagonist’s goal? This will directly flow out of your story’s inciting incident which should be emotionally gripping. They want/need this goal so much they won’t turn back no matter what. If nature, or animals, or some character flaw is just an obstacle then you need to make sure you have a compelling antagonist too. Let’s say we have a story about a man on trial for drunk driving and killing a pedestrian. His alcoholism is certainly a flaw he needs to overcome, but if his story goal isn’t getting clean then it’s just an obstacle. Maybe his goal is convincing a jury he’s innocent, or his story goal is to walk his daughter down the aisle at her wedding. These kinds of internal conflicts can be a compelling emotional arc, but it takes more than a man being an alcoholic for addiction to become the antagonist. 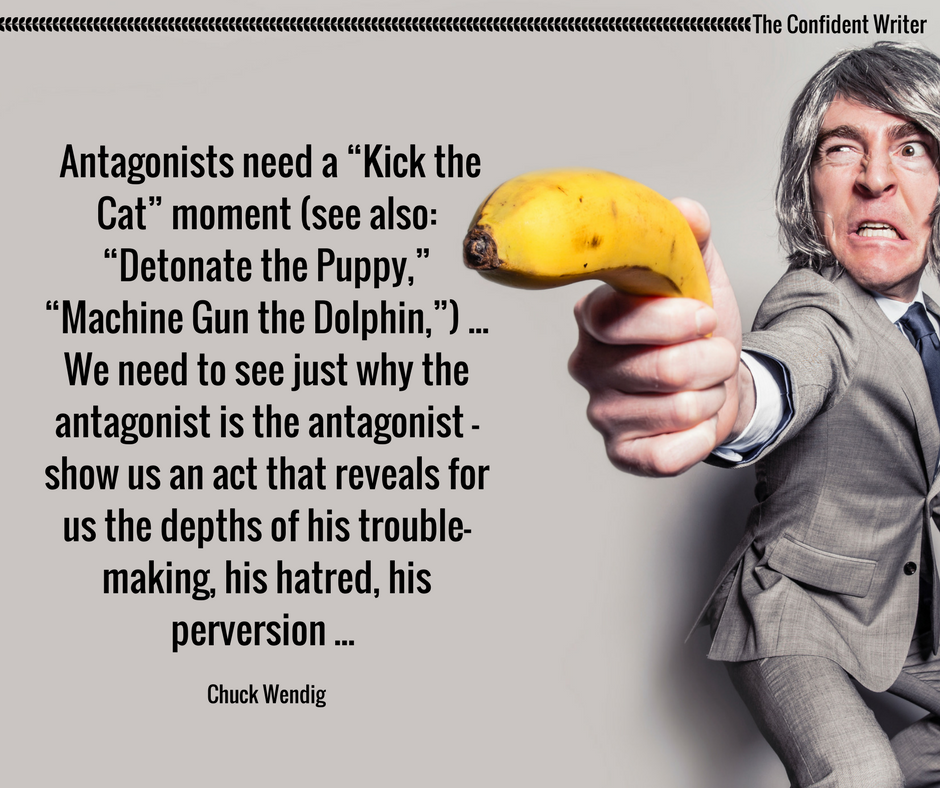 Now that you know you have a genuine antagonist that’s non-human, the difficulty becomes in showing that conflict. Many writers use personification–they give the nebulous antagonist a tangible shape or face. They use a proxy character. President Snow stands in for The Capitol in The Hunger Games. Often in stories where natural disasters are looming, there’s a radar that predicts the coming damage. There’s a live computer simulator they fight with trying to find a solution. There are naysayers, other antagonists and even villains working against the protagonist. Conflict is best when done face to face, so how can you give your non-human antagonist a face?

If your character is opposing a large faceless corporation, government, or societal will, have someone who defends what the protagonist is fighting against stand in for the antagonist. Readers want to put a name or a face to the “bad guy.” They want to know what the protagonist is fighting against. In The Lord of the Rings, the big bad antagonist is an evil force with no body or face, it’s just a lidless eye wreathed in flames, but it has a name–Sauron. The story was over when Frodo destroyed the ring and Sauron.

Some characters have two sides to them. Think of werewolves or Jekyll and Hyde. These seem like human vs himself, but they’re really human vs human because their alter personalities act and think independently, sometimes without memory of what the other did. Even though the personalities inhabit one body, one is the protagonist and the other the antagonist. You write them as though they are two separate characters.

Ted Dekker’s novel Th3ee uses a character with split personalities, but you don’t know that until the end because you don’t get the antagonist’s point of view. Dekker’s construction of these two separate characters in one body who act and think independently is well done. 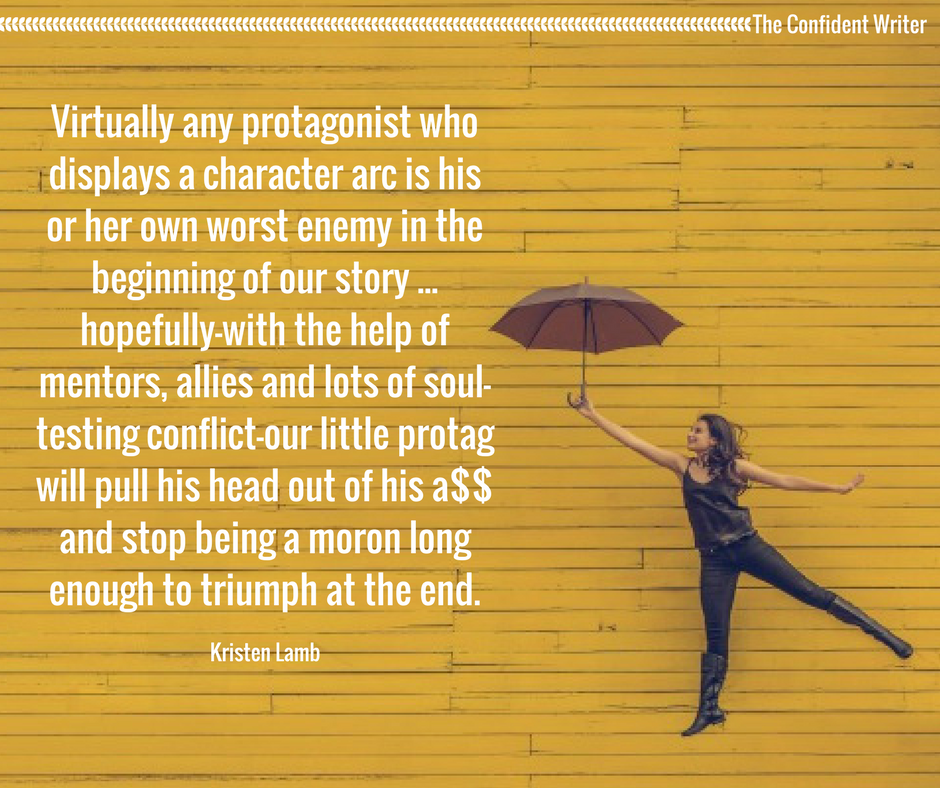 In Nicholas Spark’s novel A Walk To Remember, Landon’s pride is the real antagonist but it’s shown through external forces. That conflict is shown through his distinct dissatisfaction with tangible things – his friends, his recreation choices, his volunteer work, Jamie’s father, his relationship with his father. It becomes a battle of wills with a visible result. Readers will feel cheated if at the end of the story it doesn’t feel like the protagonist has achieved anything.

As Tolkien wrote in The Lord Of The Rings, there are some things time can’t heal — like PTSD. So even if the antagonistic force in your story isn’t one that can be overcome–like a recovered alcoholic can’t ever drink again–having a tangible external force to fight against that parallels or highlights the internal struggle still delivers a payoff (satisfying end) for readers.

What kind of conflict or antagonistic force does your story use?

You can get a copy of my book Method Acting For Writers: Learn Deep Point of View Using Emotional Layers here.