You are here: Home / Editing And Marketing Fiction / The Details Make The Story

Description is my Achilles heel. My writing tends to be so sparse it’s practically naked, and to make up for that lack I’ve done some pretty embarrassing things in the pursuit of details.

It’s fun to go back to my earliest manuscripts and see how much my writing’s improved. And then shake my head – I showed that to an agent? *smacks head* Live and learn. But those stories have taught me a lot – and one of the lessons I’ve learned is that description and sensory details are things I have to consciously add in, adding layer after layer with each edit. And then my co-writer reads it and says, ‘You need more description.’ lol. So, I’m still learning.

In fact, Marcy – my co-writer (and long-time critique partner) on the latest WIP, constantly fires questions at me about details on the scenes I write. They go like this:

Marcy: What kind of tree are they sitting in?

Marcy: But I want to picture it in my mind. What kind of tree is it?

Me: I don’t really care what kind of tree it is. Pick one.

Marcy: Let’s make it an elm tree. The bark smells like poop.

True story. Now, you might find this amusing – but you multiply that process a dozen times for every chapter and I’m ready to throw my laptop across the room. But Marcy’s right – description is important. 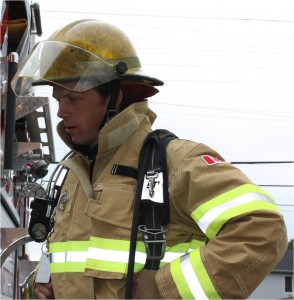 An Errand Of Fate

I have a romance manuscript in a drawer somewhere – yep, in hard copy. I wrote it about eight years ago. It’s a sad thing – but I still really love the characters. It features a firefighter as the hero.

This was the first novel I’d ever attempted, and doing research wasn’t something that had occurred to me. I was driving down a busier road with my 3 kids on an errand. I ended up following a fire truck – the kind where firemen sit facing backwards behind the cab. I caught a glimpse of one fireman’s face. This was the face I’d been picturing in my mind of my main character. So weird, right? I mean, there he was – in real life – in living flesh, before my eyes. I followed the truck for several blocks at a likely unsafe distance just to stare at the poor man, what clothes he was wearing, his posture. At some point he realized I was staring and waved. It’s actually impossible to duck behind the steering wheel and stay in the same traffic lane – trust me on that one.

Anyway, I decided there had to be a safer option. So, my introverted self booked a tour at the local fire station (not the one I’d followed the truck to across town) and dragged a writer-friend with me. Turns out people love to talk about their work. We were given the longest tour in the history of that fire hall. We touched all the levers and buttons and dials. We sat in every seat in the firetruck, tried on the hats. Eventually, all the firemen on duty that day were standing in the truck bay telling war stories with the chief – and I soaked it all up. Pretty awesome, right? They even helped me with an arson scene – those guys are pretty creative.

As we’re doing this tour, I turned to the fireman and asked if I could feel his hands. Now wait – It wasn’t like that. I grew up reading romance novels – devoured them – one or two a week at least. The feel of a man’s hands is an important detail to romance readers (I really hope the hubs doesn’t read this). The fireman agreed to let me feel his hands after I made him blush. His hands weren’t rough as I’d imagined them, they were very smooth – more like a mechanic’s hands. That was sensory detail gold, right there. Anyway – OK, maybe I’m the one blushing as I write this (how do romance writers who are married handle this?) – but my point is that details are important and sometimes hands-on research *cough* get-your-mind-out-of-the-gutter *cough* is required.

Not being good at description or details isn’t an excuse not to work at it (even if you have a Marcy). Take a hard look at your story. Is there anything you need to research more to give readers the description and sensory details to make that scene, that setting or character really leap off the page?

What’s one of your favorite sensory detail to include in your stories? Have a story about researching your novel? Share them (then I won’t feel so neurotic).