You are here: Home / Business Of Writing / How A Recipe Feels Like A Memory

Is there a memory from your childhood that sneaks up like a shadow? “Ain’t it funny how a melody sounds like a memory.” ~Eric Church My grandmother left me her recipes. 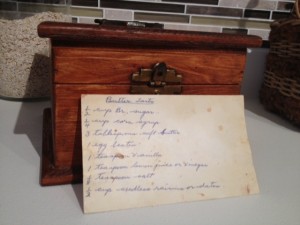 My grandmother was a farmer’s wife, mother to seven, grandmother to 21. She was no-nonsense, practical, with lists to put order to the chaos and a vegetable garden bigger than my entire backyard. She made her own everything. They never had a lot, but always enough to share with a stranger in need.

Row after row of rising white manna spread out on the baking board, filling our hearts with smells that made that 3rd generation farmhouse a home. Cinnamon buns, dinner rolls, more bread than seemed possible to eat. Basted with egg whites to brown the tops. We always ate the crusts. And every week she made more.

She hid gingersnaps in the cupboard by the door in the old cookie jar. You could have as many as you wanted. She’d wag her finger, “Now, don’t you spoil your dinner.” Those cookies could break teeth, but the thought of sneaking a treat before dinner made Grandma a secret ally, an accomplice. Why is it the forbidden treats taste the best?

And I always ate my supper.

She knew everyone’s favorite dessert and always had it on hand from tarts, to squares to cookies. With apple squares for this group, and date squares for that crowd.

“Fetch me that recipe — the one your mother gave me.” I’d finger through each card stained with shortening and sugar, the corners curled from use. In the recipe box that Grandpa made her. “Now, your Grandfather made that, so be careful with it.” That box was built to survive the zombie apocalypse, but it was handled with care out of love for the hands that made it.

When she wrote a letter, she shared about everyone else but rarely about herself. Those recipe cards with her familiar handwriting are like a personal letter from the grave. Warming my heart. The apple squares that Gary likes. The marshmallow squares for Lisa. I smile at the chocolate cake recipe from Helen (I don’t know who) that says, ‘fill the white bowl with flour to your first knuckle.’

Still haven’t figured that one out. I don’t think she ever did either.

“What can I get you” goodness pulled from the freezer whenever anyone came to visit. In her handwriting I see the love for her family and the wonder of a child who wanted to grow up and be just like her. That box doesn’t hold recipes — it holds memories.

“Why would you want that?” She asked me when making out her will. It’s old, she said.

But I knew what I was asking for.

So I got her recipe box — the one that Grandpa made. It sits on the counter where I make meals and school lunches. The recipe box filled with her at the counter stirring cookie batter, at the stove making tarts, over the bread board kneading dough. The recipe box that reminds me it’s better to listen than to talk, to laugh even when you hurt, that a good list can put everything to rights, and buttered toast cut in four makes every tummy ache feel better.

On my counter where I work every day, sits my grandmother’s recipe box. Alongside her recipes I’ve added a few of my own. She’d shake her head at me for being so sentimental. It’s just a box, she’d say, and we’d both know she was lying. 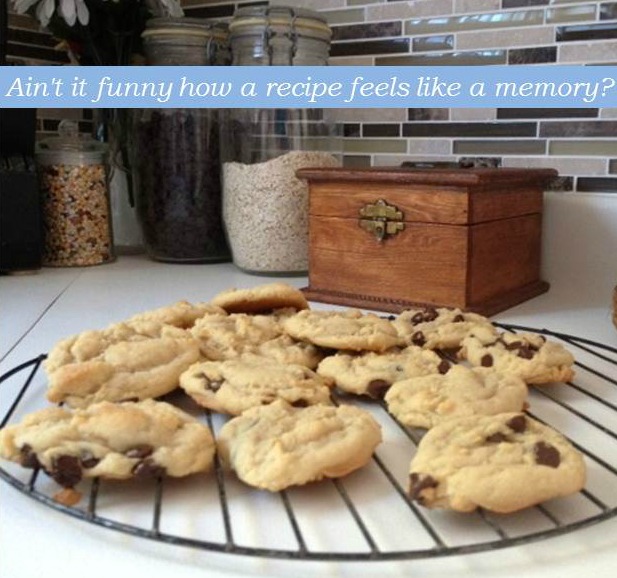 Ain’t if funny how a recipe feels like a memory?

Is there a keepsake that holds a lot of memories? Is there a specific memory from your childhood that always makes you feel loved?