You are here: Home / Business Of Writing / Biking In Panties

This is not that kind of post – this is a true story. It wasn’t a bet, I wasn’t drunk…I didn’t plan to bike 15 kilometers (just under 9.5miles) in a t-shirt and panties. It’s funny now, but at the time I wanted to crawl into a hole and die from embarassment. 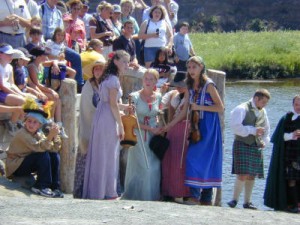 I spent a glorious summer working at Fort William Historical Park – the world’s largest recreated fur-trading post. The summer before my final year at university, I got paid to dress in period clothing, (or rather, modern period clothing because we wore bras and panties and deodorant) pretend I was someone else, and research history. Sweet deal. It was actually a huge dream of mine to work at an interpretive historical site like this.

The Fort portrays the year 1815 and is located outside Thunder Bay, Ontario. I interpreted a young Métis woman (French father, Native mother), Jeanne Chouinard, who spent her days giving tours of the Fort and trying to convince a guy to marry her because she was tired of sleeping on the floor of her sister and brother-in-law’s bedroom with her 5 yr old niece. She wasn’t picky, and Voyageurs could always be counted on to flirt, dance, and tease. I was proposed to at least once a day, and went home each night to my husband with a clear conscience. I had opportunities to play the doctor’s wife, and the jailer’s wife also.

The whole summer was an absolute blast.

Except this one day… 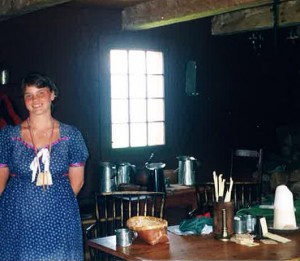 Me in period costume

I was late one morning, flew into my costume, and ran out for the staff meeting. Normally, I folded and placed all my outside clothes neatly in my locker, but that day I barely had time to change and run. At the end of the day, I was assigned an extra tour and was late returning to the change room. My shorts were gone. GONE! Could not find them anywhere.

It was a 15km bike ride from my apartment to the Fort. I mean, as a starving student why pay bus fare when you have a perfectly good bike to get you there. This was before cellphones fit in your pocket. My parents lived too far away, we didn’t own a car, and I was NOT calling my father-in-law to come and pick me up in my panties.

I seriously considered turning back and just hiding out in one of the historic buildings for the night. But, the thought of bumping into my boss trying to sneak back in was less than appealing. To wear my costume outside the Fort would have cost me my job, the logistics of biking in the A-line cotton floor-length dress aside.

So, I pulled my t-shirt down as far as it would go, hopped on my bike, and headed home.

The kick-back riding past the pulp mill with flying wood chips was not fun at all. Of course, every stoplight was red on the way home. It’s impossible to keep a fitted ladies t-shirt pulled down over your bottom when you have to put one foot down at every intersection, by the way.

My path home required me to bike through town on one of the busiest east-west routes in the city. Why not take an alternate route – go through the bike paths and parks? Because I’m also directionally handicapped. Having to bike home in your panties is bad enough, getting lost on a bike in your panties is much worse.

I wasn’t wearing a thong (thankfully), but nothing fancy enough to pass for short shorts, and nobody is mistaking white cotton for a bathing suit. Absolute total humiliation. I was biking through town about 5:30-6pm – so yeah, rush hour. Old ladies covered the surprised O on their faces with their hands. Guys stared extra long as they passed in their cars. Had to bike through the university campus – that was fun…surprisingly busy for summer.

When I finally arrived home, I burst through the door, my t-shirt stretched beyond recovery trying to cover my behind. I pushed past my husband (who didn’t seem to notice my pantless state – the one person I wouldn’t have minded noticing – figures), slammed the bedroom door, jumped into bed, and pulled the covers up over my head.

The next morning I stuffed an emergency pair of shorts in my backpack in case the pair I was wearing disappeared too, and biked to work. I was too humiliated to ask if anyone had picked up my shorts – I was willing to lose them to keep the whole incident quiet. At the end of the day, the girl with the locker next to mine holds up my shorts. “Whose are these? I just found them in my locker.”

Lesson learned. Always pick up your stuff. What about you – ever learned a lesson the hard way?

“It would be different if one had tried to tell the whole truth. That would have some value.” – Ernest Hemingway

“A woman is like a teabag – you never know how strong she is until you put her in hot water.” Eleanor Roosevelt